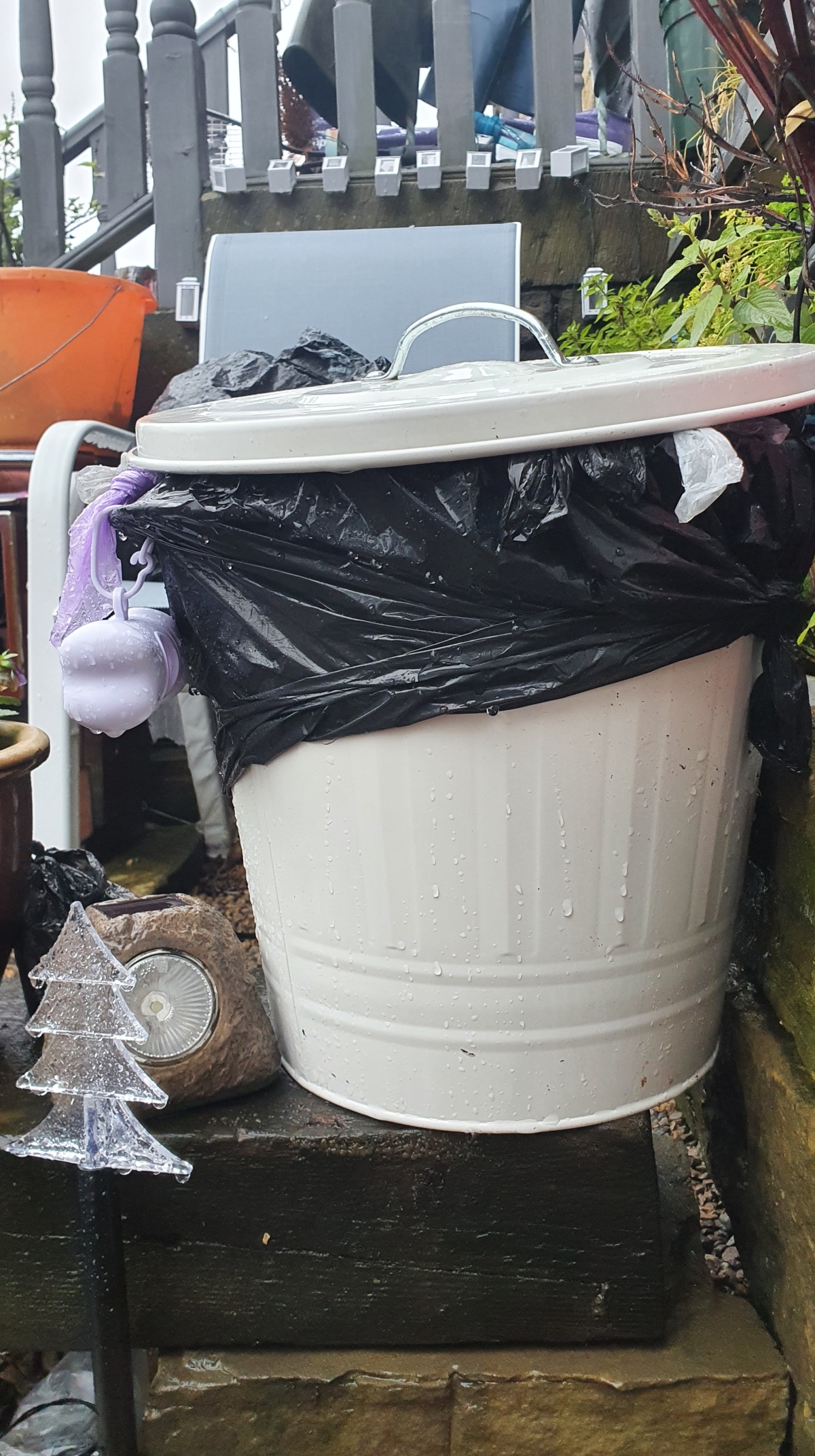 Have a listen…its all very scientific.

Listen to Want to buy some dog poo? by michael on #SoundCloud
https://soundcloud.app.goo.gl/BwMt7 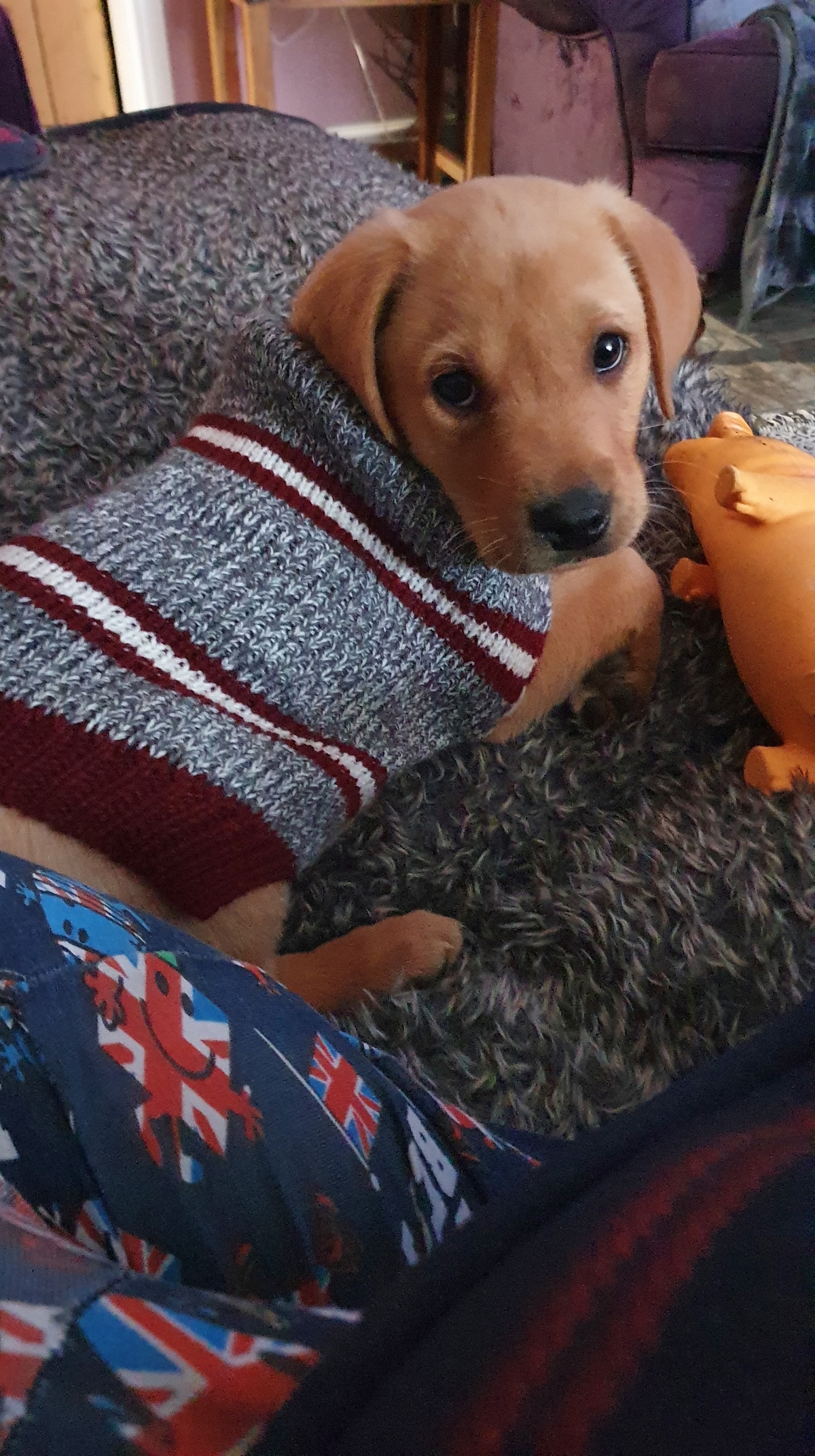 So you know I got me a hound right? Well if not I did. Gorgeous little lab. Anyway, turns out despite having plenty of places to relieve himself he has become obsessed with befouling my beautiful lockdown rockery I worked so hard at.

This lovely little bouncing befouler seems hell bent on declining the offer of a whole selection of suitable defecation options in favour of besmirching my succulents.

Were working through it and I am not quite sure who will win to be honest. He already massacred one of my delicate alpines in a most upsetting manner after he had a few too many treats which agitated his tummy so 1-0 to him I guess.

On the upside though I did discover a hidden benefit of dog ownership when I got to the shop without a mask. Three poo bags tied around my head did the job nicely. Down side though was that I nearly bloody suffocated for the sake of toilet roll and a sliced loaf. 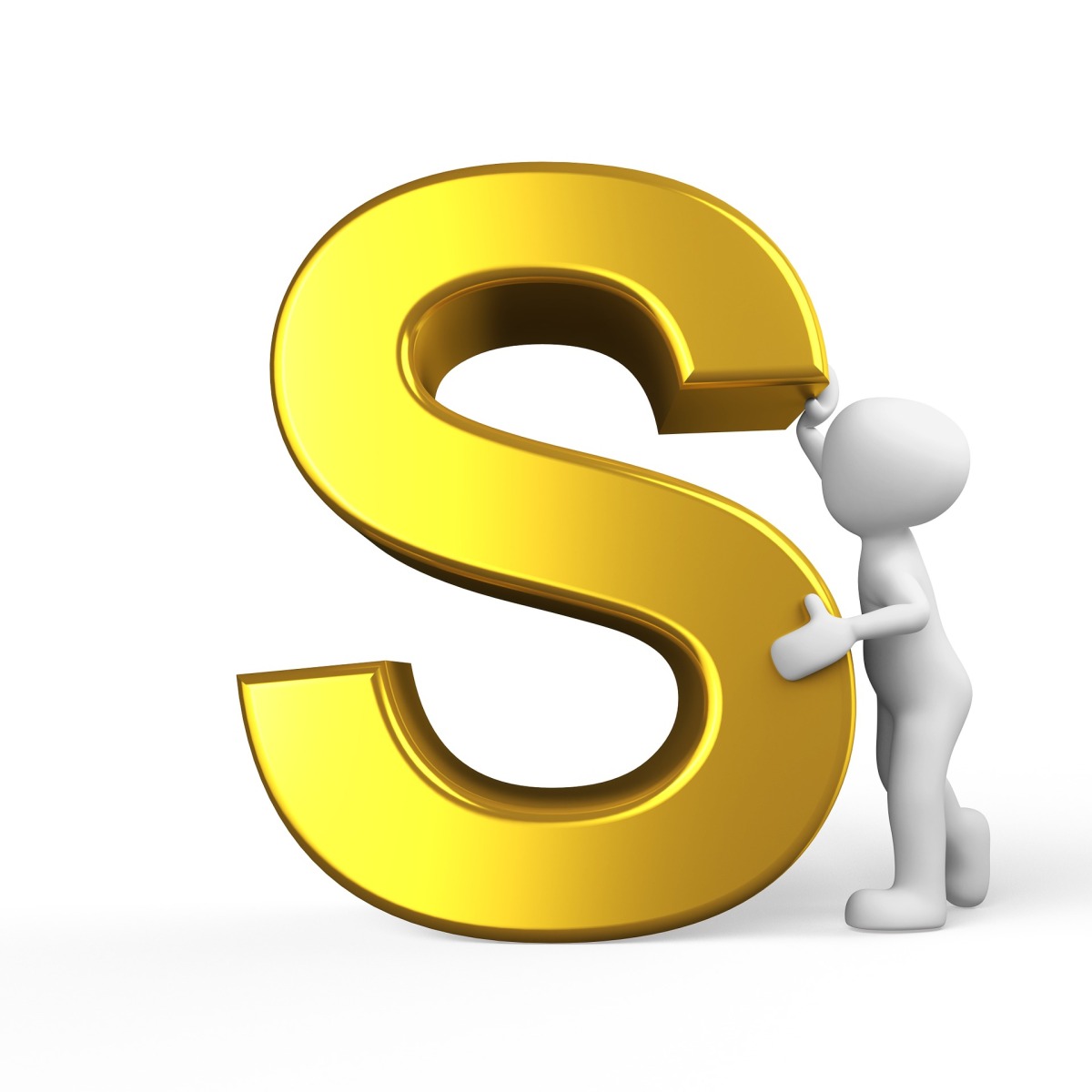 suckling us with your rancid saggy tits

filling our hungry mouths with your curdled filth

Our eyes watering as we gag on your putrid…

I have really enjoyed this year, despite how it may appear at times.  The year isn’t yet out and who knows what today will bring, but when it does close I wont be looking back any regret.  As I have gotten older I realise more and more that regret is a steaming bowl of maggoty stew and will only lead to you sat on the loo with your head in the sink praying to Jesus asking him to kill you as your body turns slowly inside out.

Ignore the maggoty stew I say and gorge on the wholesome soup of what could be because it had croutons and delicious chunky bits at the bottom…and it won’t make you shit your pants!

Words to live by!  BOOM!

There is one about a panda which could have been special but mostly it is just a bit dirty. The rest are just crass. 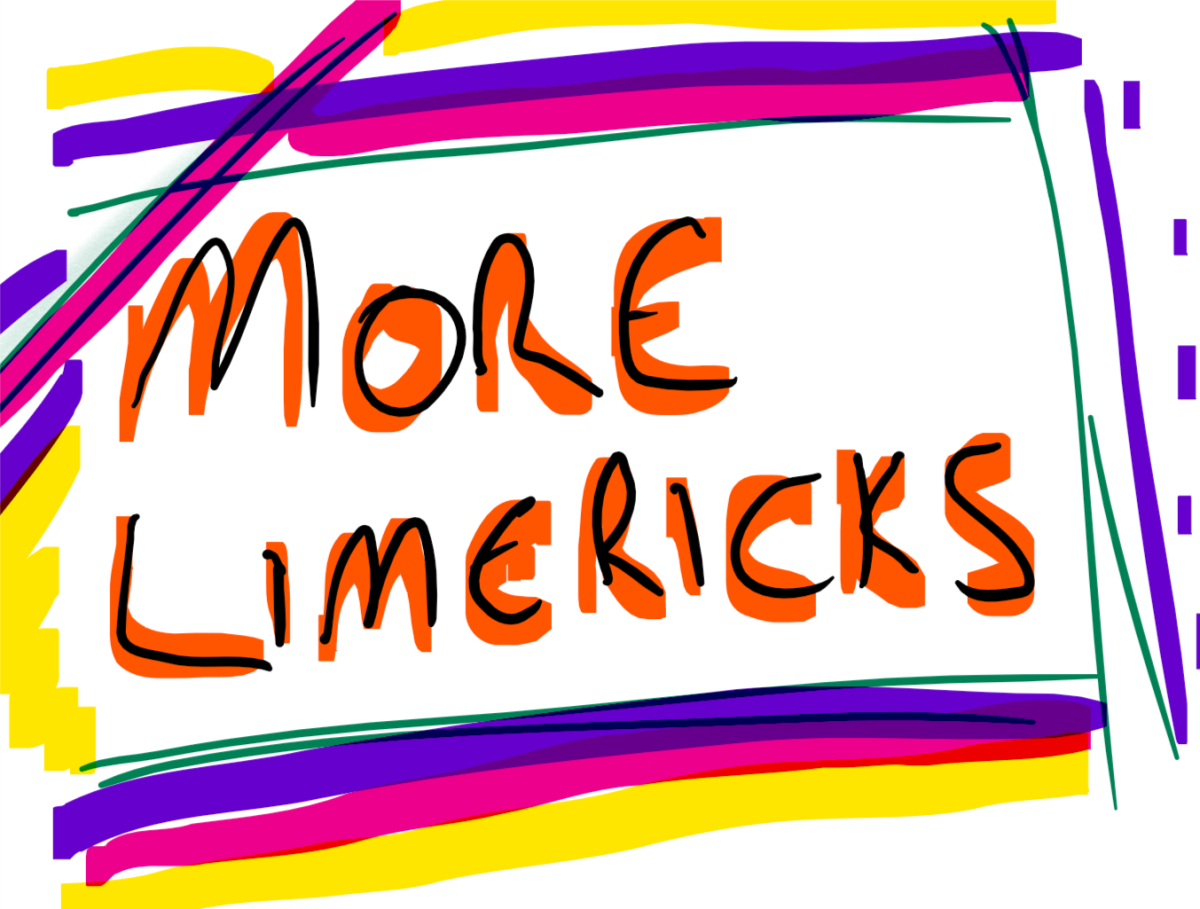 There once was a chap from Milan

Had a thing for his best mate Paul’s gran

And her pendulous tits

of her saggy old  thighs, a big fan

An irregular builder from Goole

Bought a potion to soften his stool

He strained with a large load

And his bowels did explode

A woman from Selby quite cute

Survived mostly on vege’s and fruit

But most every fart

Would result in a shart

Just imagine the stress of each toot

A lonely young chap from Uganda

At the zoo fell in love with a panda

And it’s come to be eyes

Got him rather aroused, double hander!

As it turns out some people need to be told not to eat their lunch whilst sat on the toilet.

I am not such an oaf that I am unaware that I can at times be offensive.  At times I am intentionally so if I feel strongly that someone or some thing does not deserve to be respected or is perhaps so laughable that to expect anything other than my ridicule would be offensive to me.  Today I am going to touch on something that falls into the latter category.

A friend of mine works at the head office of one of the UK’s largest retail banks, and in his early years with the company getting to head office was seen as the holy grail and something to be aspired to.  The Bathrooms had real towels he tells me with some enthusiasm.  Having worked here for a decade now it is with some sadness that he explained to me that as he looks back things are not always as they seem.  The full scale of the decline of the dream was apparently summed up this week by the photo below which he took in the 4th floor bathroom and sent to me with the caption “This is how the Roman Empire fell”. 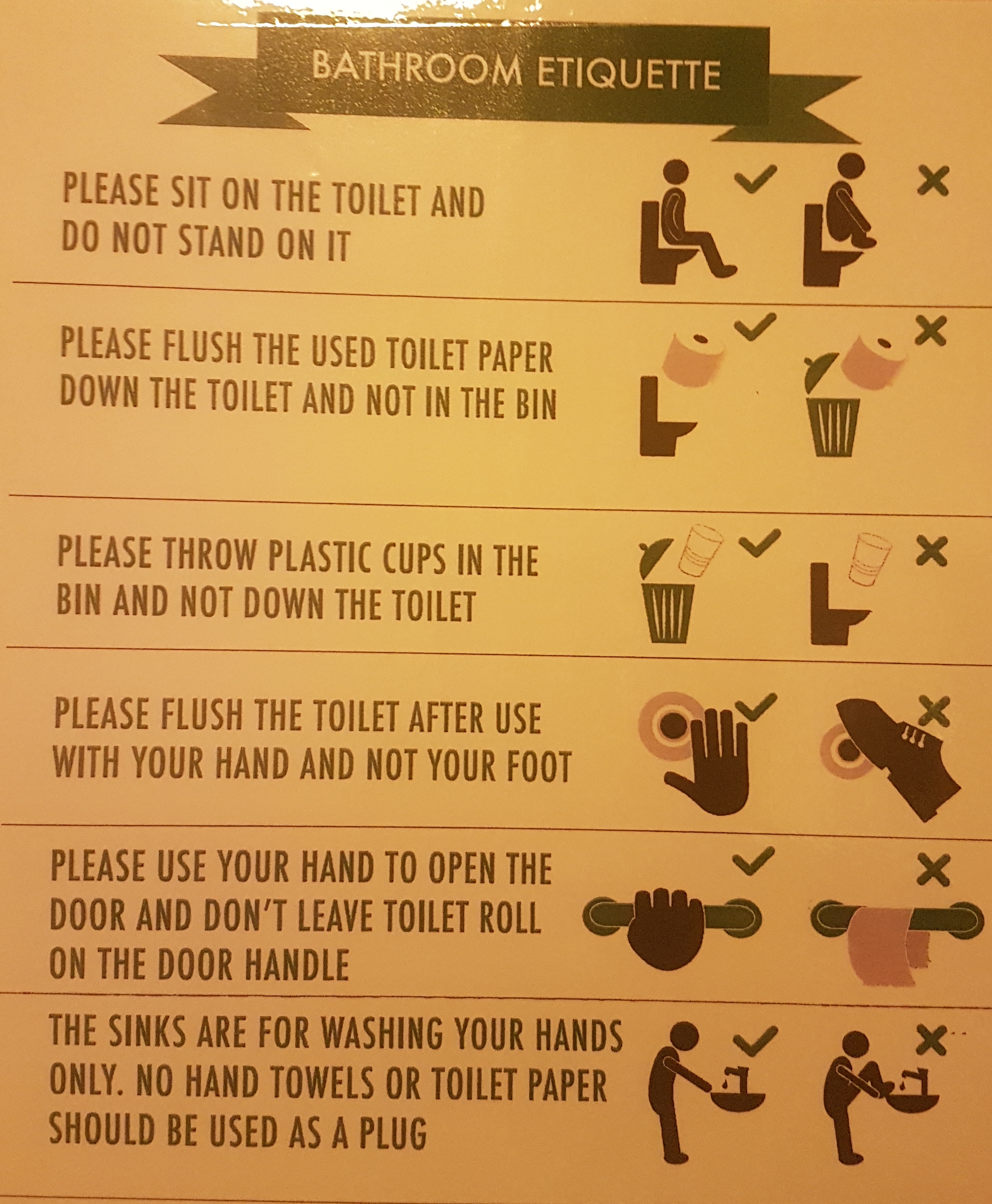 Now I realise that people are different, and I do my damnedest to be nice I really do but who the hell needs a sign putting up telling you not to stand on the bloody toilet seat to take a shit?  The health and safety risks are pretty obvious I would hope…Imagine you topple forward and knock yourself out and some poor bugger from the search party finds you arse up covered in nasty as he peers over the top of the cubicle.  No one gets over that.  And what sort of aim to you need to have to make a successful deposit perched atop a fragile plastic seat arms braced against the cubicle walls?  I am sure it’s quite an achievement when you nail it but the state of most public toilets would speak to the number of unsuccessful drop offs.

My point here though is not to ridicule each of the etiquette points, as easy as that would be.  Instead I’ll talk about what I did next because, to be honest, it just gets more and more surreal.  I googled “Why do people stand on the toilet to take a crap” and spend the next hour reading some of the most ridiculous shit (quite literally) I have ever come across.   Perhaps I am just ignorant and crass and a quite horrible human being for what I am going to write next, and if so then so be it – at least I know how to go to the toilet.

Did you know that there is one faith that believes you should enter the toilet with the left foot and leave it with the right?  What if you have one or no legs – you just go in your trousers?  Apparently some believe that if two chaps are taking toilet time in adjoining cubicles they should under no circumstances speak to one another.  Maybe it’s just me but I appreciate a little noise if I am in a public loo, it disguises all manner of things.  Oh and these two chaps are also not allowed to touch their genitals with their right hand, look at each others genitals or eat whilst evacuating themselves.  What sort of people must they be to need rules that say don’t eat a sandwich with your trousers around your ankles whilst looking at another mans balls whilst he’s on the loo.  Serious now…

There are at least two of the major faiths that insist on a little prayer after they’re all done, one of them apparently thanks their deity for “relieving them of the filth and giving them relief”.  This will be why there are children suffering with Leukaemia and aids not being divinely healed – god’s too busy helping a billion plus perch on top of lavvy seat to take a dump.

Now I know one should not believe everything one reads on the internet, but if one page I read is to believed then it is absolutely critical for a man to place a cotton bud the size of a piece of barley inside his penis to avoid drippage post urination. What sort of twisted bastard god insists on that?  Apparently you should perhaps walk, cough or lie on your left side to fully empty the urethra.  Have you seen the state of a lot of toilets?  So not only do you have a cotton bud rammed down the end of your manhood but your nice new jacket is covered in piss and shit from lying on the motorway toilet floor coughing.

Quite happy to retract or correct this if the internet is lying about all of this but I think maybe it isn’t.   Oh, and don’t get me started on that holiday I took to Greece once where I had to put the filthy loo roll in a basket next to the toilet.  Do you know how hot it is in Greece?  It’s frigging sweltering and …actually I will just keep that for next time.

I’m sorry but some days I really do despair…