For me it starts once I have seen the coke advert…

I was unsure as to whether posting on the matter of Christmas was a little premature, but I saw the Coco-Cola advert last night so for me that is the traditional beginning of Christmas and a green light to write about it.

Actually, I should confess that our family Christmas traditions started week before last.  Each Sunday in the run up to Christmas we watch one of the Harry Potter films, and by the time they’re all done the big day is upon us.  I just think there’s something about the films that screams Christmas plus it gives us a chance to curl up in front of the fire on a gloomy English Sunday afternoon and spend time together with the kids who, as they get older, are often keen to be anywhere else.

While I am at it I have another confession.  On Sunday we had our first family Christmas get together.  Now I know it is only mid November but my Dad works in Kazakhstan much of the year and this was the last chance we had to get together before he goes away until the new year so we had lunch (not a festive one as the Christmas menu was not yet out) and exchanged gifts.  This has become something of a tradition in recent years, and we now seldom meet over the Christmas period.

Funny you know, but I had intended for this to be something of a rant about the things I don’t like about Christmas – and there are many, but over recent years I have learned to enjoy it more than I ever did, and I think perhaps it is because as a family we are making our own traditions and not simply slotting in with other peoples.

Yes we see our families and friends, but when it works for us instead of it feeling like an obligation.  It’s selfish perhaps, but sometimes it is important to consider what you need first because just pleasing others at your own expense isn’t always a good thing, as selfless as it might seem.

Do you have any traditions that you’re excited about?

Anyway, see you tomorrow for ‘D is for Duran Duran’

Proof that there the stupidity of some people knows absolutely no bounds.

I am quite sure you have asked yourself this question at some point.  let me show you how it works.

Surely millions of Americans will not vote for Donald Trump to become President, who would be so stupid?

The UK could feasibly vote to leave the EU, but surely not – who would be so stupid?

Let me give you another example.  I am currently writing this from Portugal, having headed off with the family for a late holiday.  Great place Portugal, lovely people, fabulous weather and only about three hours flight from the UK so perfect for a week away.

Imagine my surprise when, as we are checking in a family discover that they have come to the  wrong airport.  Serious.  I mean how the hell do people with enough brains to book a holiday to the Algarve manage to get all the way to the airport, laden with luggage, boarding asses in hand to discover that they have gone to Manchester airport instead of Leeds/Bradford airport.

Not only did they turn up at the wrong airport but so organised were they that they had booked a hotel nearby so that they did not have to travel to the airport the next day but were instead close by to allow them to sleep as late as possible and not face into getting up in the middle of the night to get there for the early flight.

On top of the hotel they had also made provision for parking for the week at the airport.  At which point did they not think to be absolutely certain which airport they were flying from.

Honest, what sort of people must these be?  The type that would vote for Brexit or Donald Trump?  Truly they must be a special kind of thick right?

I shall tell you what sort of people they are if you have not already figured out where I am heading here, they are people like my wife and I because that is exactly what we have done.  Instead of heading to the airport close to where we live we simply assumed that we were flying from the airport that we have used for our last 3 holidays and went there instead.  We printed off all the boarding passes and holiday documentation and at no point actually checked it.  We simply knew we had booked and paid for a holiday, that the flight left at 8.15am and that we needed to be on it.

It’s an expensive to make trust me, and £600 of new tickets and a few tears later we were on an alternate flight and despite missing our transfer we still managed to get to the resort just as the shuttle we would have been on arrived at the hotel.

You just never know what people are capable of do you… 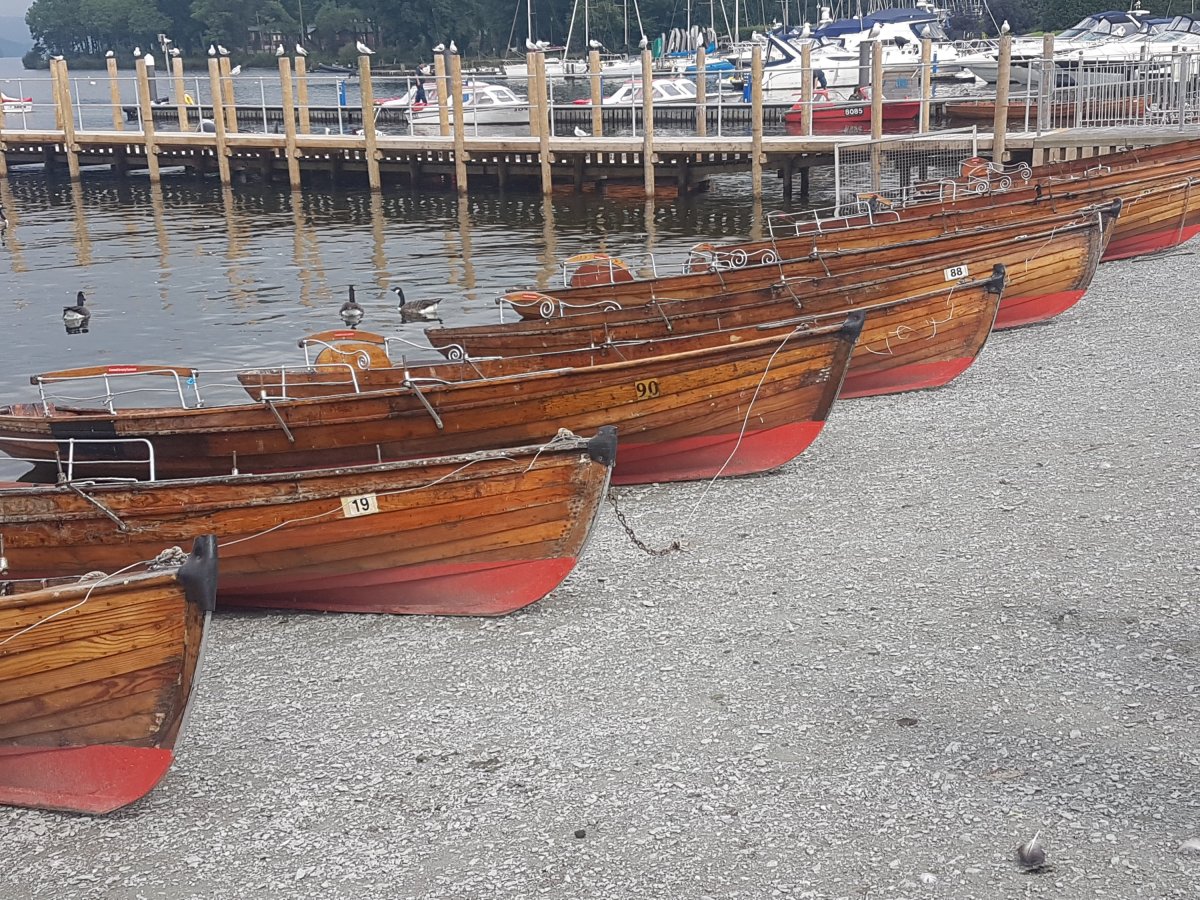 I have only once ever before tried my hand at sharing something one might class at travel, which you can read here.  it is not my strong point, so in the interest of self improvement here’s a little something else covering a recent trip with the family to the lakes.

Departing Lakeside on a grey yet pleasant day in the English Lake District we boarded the Tern, built in 1891, and headed out across Lake Windermere for the town of Bowness where we hoped to take in the World of Beatrix Potter exhibit and feed some ducks maybe.

The children were quick to confirm that the Tern does not in fact have on board WiFi and that in the middle of the lakes there is  little or no 4G connection which is apparently ridiculous, stupid and completely backwards and likely to ruin your a previously rather pleasant morning.

The 35 Minute ride across the lake provides some rather lovely views of unspoiled coastlines and magnificent houses which you will never be able to afford and that may leave you feeling just a little dissatisfied with your lot in life.  On the upside, the boat had clean toilets and a bar, which was nice.

The view from the stern of the boat offered fantastic views across the tranquil waters and also kept us away from the family who seemed set on allowing their screaming child to spoil said tranquillity with his monstrous howling inside the covered decks.

Historical and picturesque Bowness greets it’s visitors with a typically English understatedness and an array of row boats lined up which you can apparently rent but that most folk just take photos of because they have their good walking shoes on and don’t want to get wet. 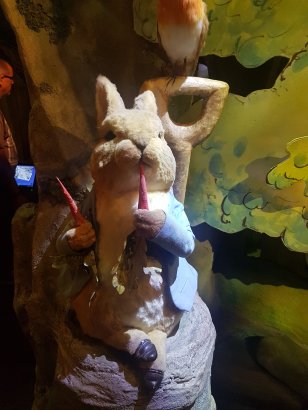 A short walk through Bowness will bring you to the rather lovely Beatrix Potter attraction where you can enjoy an interactive 40 minutes with the wonderful characters of her books whilst liberal hippy looking types ram into the back of your legs with their prams and children named Sebastian and Bella run wild whilst their floppy haired father sips on his Starbucks and celebrates his children’s uniqueness.

What better way to pass time waiting for the boat back than a quick tootle on the land train.  This was made extra special by the chap who seemed more content on playing candy crush and wishing for a different life that preventing his kids from hanging out of the carriage windows.

Throw in a packed lunch and a spot of shopping and It was back on the boat headed back to Lakeland for a quite magnificent afternoon tea.  With magnificent waters edge views, sumptuous clotted cream and damson jam and the lightest of scones it was a quite perfect end to the day.  It was also perfectly overpriced, just enough to keep the riff-raff out. 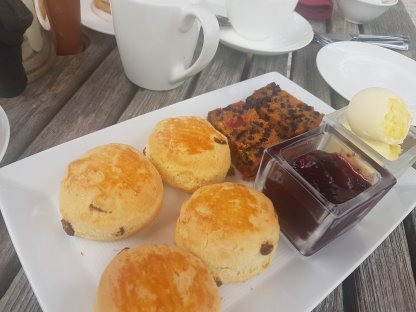 A perfect end to a lovely day. 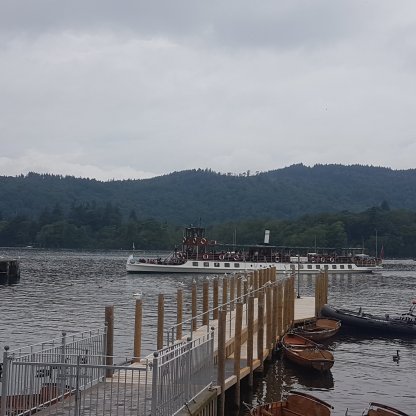 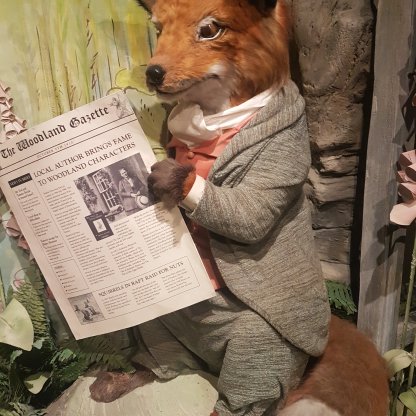 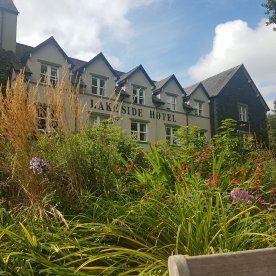