For a while he lay there looking up at the light.  “It really is quite pretty” he thought, “I should get one like that for the hall at home.” 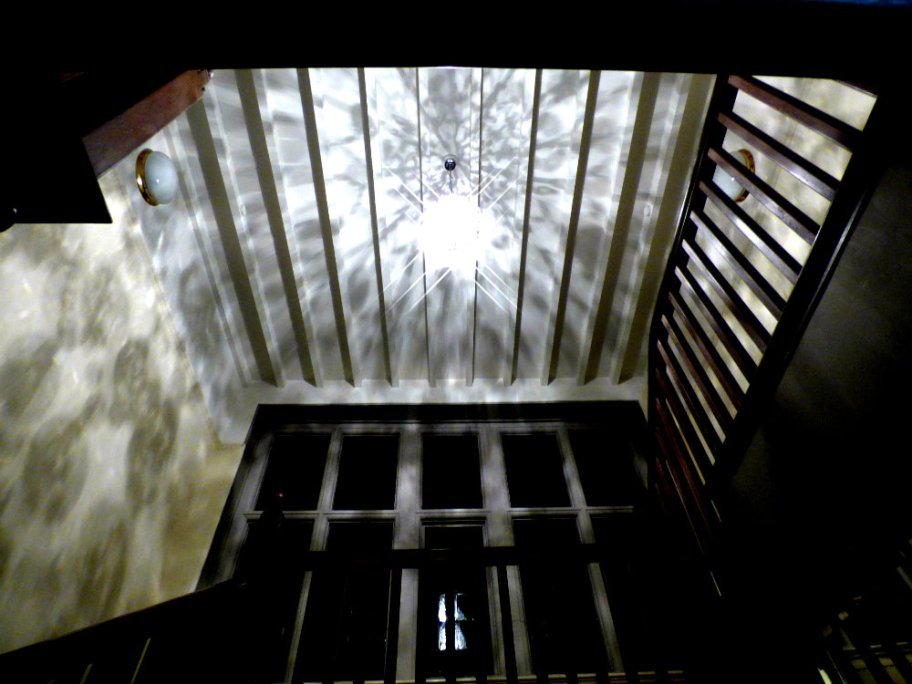 I’m cheating a tad on this and using it for 2 prompts.  I had the idea from Michelle’s writing prompt which I have decided to use to write about robots and such,  but it never really worked until I saw Sue’s photo prompt.
———————————————

The first thought that went through Terence’s mind as he opened his eyes was “What a lovely light,  it almost feels like I’m underwater.”  This thought was soon followed by a second which considered why the devil he might be lying on the floor and a third one hot on the heels of the second which pondered where exactly he might be.

He attempted to move but nothing happened.  His eyes seemed to be working just fine but beyond that nothing else did what it was meant to. Not one thing.

“Well this is just no good” he said to himself, “this simply will not do at all.”

He strained again but still nothing.

For a while he lay there looking up at the light.  “It really is quite pretty” he thought, “I should get one like that for the hall at home.”

In an instant something about the word home triggered an explosion of memories and emotions inside of him.  He was suddenly overwhelmed by a lifetime of experiences flashing before his eyes, and it all started with her.  She was present in almost every thought and every memory.  She seemed to have been there from the very beginning but for some reason he could not recall her name.  He could feel her touch and he could hear her voice , and she was all at once a stranger and so very familiar.

There were children too, and grand children.  Birthdays, holidays, Christmas and so so much love and laughter.  There was a little house by the sea, and a dog that always barked when the gate creaked.  Memory after memory washed over him as he lay there looking at the ceiling, and as they flashed by she became older, yet no less beautiful.

In between the laughter there were tears, and the cold darkness of solitude and yet always the laughter and the love would return and each time he would see her smiling face.  A great sadness overcame him as he saw her laid to rest, her coffin laid into the ground on a cold grey day.  Terence lay quite still and enjoyed the intensity of each moment until, at last, he remembered how he got here, where he was and why he was looking at the ceiling.

And then there was nothing.

The Engineer crouched over Terence and ran a scanner across his forehead.  He spoke into a small receiver embedded in his grey coverall collar.

“Base 9, this is Henderson, I have found the synth and can confirm that shut down has completed.”

“And what is his Status?” came a response.

Henderson double checked the dial.  “I can confirm that the unit has reached end of life cycle and his memories have successfully downloaded to central.”

“Good work Henderson” came the response, “We will format the content and pass it onto the family, seems the owner’s kids were pretty fond of the unit and have asked for the memories.”

The end of times

I tried to say goodbye.

9 thoughts on “A generous portion of life – #Writephoto Challenge”